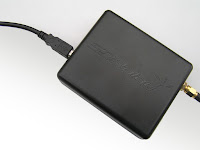 With the advent of faster computers and large scale integration, it is now possible for software to emulate most of a hardware receiver's functions like IF, tuning, filtering, discrimination, etc, using magic tricks like high speed math functions such as Fast Fourier Transform (FFT) analysis.  SDRs first appeared as Digital Signal Processing "DSP" helper functions in high-end receivers.  These circuits were soon reduced to dedicated chip sets that appeared as cheap "dongles" that could tune AM/FM/TV broadcasts.
The folks at UK-based (SDRPlay.com) took things one step further by intelligently marrying the capabilities of existing components to produce a small, potent, and highly manipulable piece of hardware the size of two decks of playing cards.  It connects to an antenna at one end and to your computer via USB at the other.  For the EE crowd, here's a conceptual block diagram of the key circuits and signal routing within the SDRPlay RSP1. 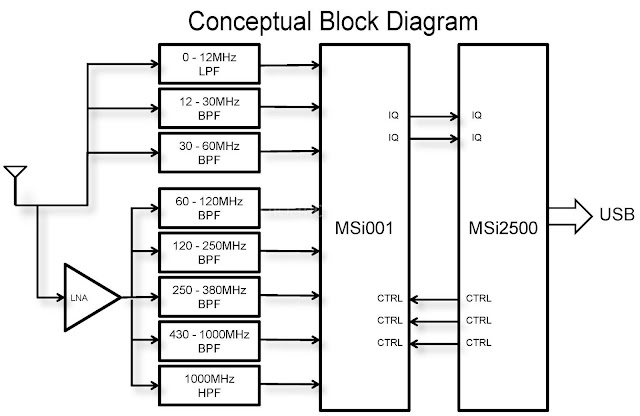 The real magic happens when PC software uses the capabilities of the RSP1 box to provide all the controls, and more, of a high end communication receiver.  Using a standardized Application Programming Interface (API) developed by MIRICS for some of the circuitry within the RSP1 made by them.  The API allows external software to access and control the SDRPlay RSP1 and provide a GUI that emulates all the advanced controls of a high-end radio with additional goodies like; a "spectrum display" which shows all signal activity over a range of frequencies centered about the tuned frequency; an audio frequency histogram showing the dispersal of auditory frequencies; and the necessary hooks to work with a transmitter.

SDRPlay now includes its own approved GUI front end called called "SDRUno" which provides so many controls and options that even hard core radio nerds may have to take a breath!  To date it is the only software we found that works reliably with the RSP1 - but only after we got the configuration just right.  Connecting the RSP1 to it to a USB 3.1 port, e.g., quickly caused the infamous Windows BSOD (Blue Screen of Death).  Here's one of SDRUno's simpler GUI configurations: 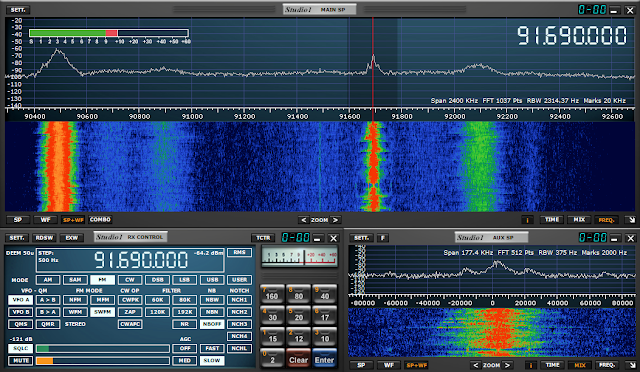 Not only does this, and its peers, like SDR-Console, provide the expected "virtual receiver" with the typical two VFOs (just like modern receivers) that allow tracking 2 frequencies, they also allow you to define multiple VRs that can operate simultaneously.  This is great, for example, to listen to 2, 3, or 4 aircraft or EMS frequencies.  If a few channels satisfy your aural voyeurism, then its instant without scanning.  Of course you'll also have to listen to multiple conversations on top of each other, like at a party where you're in several conversations at once.  The image below shows one such a configuration but there are myriad possibilities.  Although SDRUno is still clearly a work in progress, what it does do is still amazing. 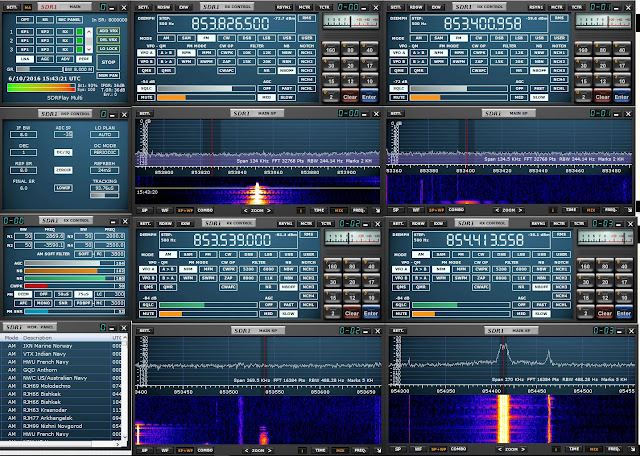 Here’s a similar scenario created using another SDR controller called SDR-Console, a product from SDR-Radio.com.  It has a well laid out, simpler screen that some may find easier to wrap their heads around.  The image below shows it also configure with multiple VRs.  It takes a different and more concise visual approach making it a bit more manageable.  Also, all of its various sections are embodied within a single Window dialog. 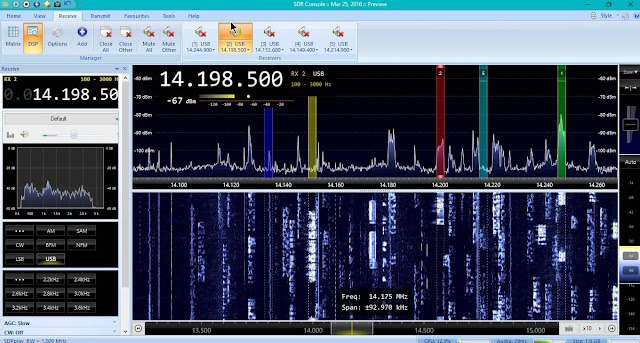 On the other hand, every functional section of SDRUno is created in its own separate Windows dialog.  That means you have to open them separately then arrange them on the screen to your liking.  So, that's both a blessing and curse.  However, once you get the screen arranged the way you like, you can save the configuration and invoke it with a single click.  Since the various function dialogs have various sizes, you can never get all the windows to line up exactly - but that's a small price to pay for the flexibility that is provided.

Alas, SDR Console runs great until it drop dead with a simple, “Waiting" then it shuts down - as if it failed to do something important and was being nice enough to exit without crashing the system with a BSOD.  It’s probably due to my system's plethora of USB ports all vying for Interrupt priority regardless of the fact that my SDRPlay RSP1 is connected to a dedicated port.

I've now tested both SDRUno and SDR-Console using the highest quality USB 3.0 and USB 3.1 controllers and SDR Controller also produced a BSOD.  That strongly suggests the issue is with the MIRICS API that the SDRPlay RSP1 uses to control it.   SDRPlay is aware of the issue and is working on a solution since newer machines may come only with USB 3.x ports.  It is likely that MIRICS will be the one to iron out that wrinkly since it is their API and driver.  We shall see.

But don't let my USB issues deter you from giving it a whirl.  A lightly loaded or dedicated system with a direct USB port connection (not through a hub) and few background processes to steal CPU cycles, your results will surely be better. The good news is that the bundled SDRUno software hasn't crashed on me once while using either a dedicated or hubbed USB 2.0 port.

For the present, SDRUno is the most stable of front ends since SDR-Console eventually crashes out even with a USB 2.0 connection.  I miss having stability in SDR-Console and love the stability and features of SDRUno.  My ideal would be for SDRUno to have a consolidate single main Window interface and the user friendly memory (aka Favorites) of SDR-Console.

Be forewarned!  Due to the intense activities performed by any of the several software front ends that can control SDRPlay, a medium-powered PC can be brought to its knees.  You also have to pay attention to hardware idiosyncrasies such some hiccups if using USB 3 rather than USB 2 which is more stable and also the sheer number of USB ports you are running off of the same controller.  Our system crashed like a rock trying to use USB 3 on a controller with several devices daisy chained on it.  After rebooting and switching to USB 2, SDRUno ran like a champ.

So, with a little coddling and experimentation, you can end up with an amazing computer controlled radio on your PC screen.  For all this power and flexibility, SDRPlay costs only 150 USD (and seems to be dropping with each passing month).  This places it in a niche of its own, priced above the many cheap and far less capable "dongle" units and well below (in price only) the high end units costing 10 times more!

Ham Radio Outlet is the exclusive US distributor for SDRPlay.
Shop their windows for this and many other goodies at HamRadio.com.

Stay tuned for a more in depth review when we get our hands on the latest generation of this amazing gadget!  Our current model is one of the 1st production models so is likely lacking some of the stability improvements of the latest generation.  One thing we did find from our limited testing is that it has outstanding FM reception.  With a decent antenna in a metro area, you can easily log 30+ listenable stations with 10+ being in the pleasurable listening category.  73s.
Posted by TK Anthony at 5:44 AM