Welcome to our new venue

As part of a total reset and redesign our publishing venue, we are busy creating new reviews, re-vetting some old ones of value, and will be posting them all when they are suitably ripe.  A list of those currently being scrutinized or being considered for in-depth reviews includes, but is not limited to, the following.  Some of the titles are expanded into what we might call a Quick Look: 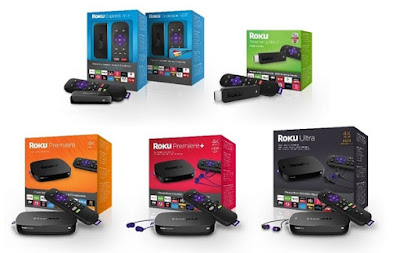 FLASH: As soon as we updated our positive review of Roku 3 Gen 2, Roku announced their 2nd Gen power boxes in two lines, Roku Express and Roku Premier with Premier Ultra being the top dog.  We hope to get our hands on an eval unit to give a proper review.  Stay tuned!.


Here's a quick chart from the Roku site comparing the models.. 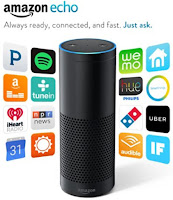 Here's some products we hope to be reporting on in greater depth as soon as we get some units to evaluate.  Jeff Bezos' Amazon broke new ground with the wildly successful Amazon Echo home auditory appliance.  The phrasing, "Alexa, play Bruno Mars" or "Alexa, What's the weather tomorrow in Seattle", soon became part of the modern vernacular with numerous product placements in TV episodes (e.g., Mr Robot), and the movies.  Kudos to Jeff for achieving a product's global brand recognition an order of magnitude faster than we became familiar with "Google that".  The 1st Echo was really great in all respects except that it lacked audio output for connection to audio systems. 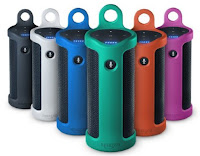 Amazon soon followed with the "Echo Tap", a portable battery unit.  At first thought, it seems strange since the Echo series depends on WiFi for access to music sources.  But, on second thought, since the FCC ruled that carriers can't charge extra for making phones act as WiFi hot spots, any phone with a large data plan, can act as your streaming source and, voila, music in the fields.  It comes with a charging stand and accessory rubber cases for that sporty look are available. 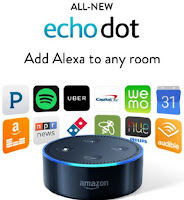 Without missing a beat, a diminutive sized unit called the "Echo Dot" was released for direct attachment to audio or home theater receivers.  Without the need for a speaker enclosure, it is no larger than a hockey puck since it connects to an audio system by RCA cables or Bluetooth.  Alas, the first version of the Dot was plagued with operator intelligibility issues since the Dot had the daunting task of operating in a huge array of situations with wildly varying acoustic environments.  It seems the engineers at Amazon were aware of the issues since they released the 2nd generation Dot less than 6 months after Gen 1 and addressed the speech recognition issue and added ESP, a method whereby 2 or more units within range of the operator could determine which unit was closest and respond with that one.  Top that off with a price roughly half of Gen 1 as well as a Buy 5 - Get one Free deal, and it's a very interesting proposition.  However, since the Dot requires an external output device, it is harder to use a bunch of them since each will require an external amp and speakers.

For the moment, bulk-buying the Dot only makes sense as a great Christmas gift purchase for all your friends who have an audio system they can connect to with RCA cables or Bluetooth.  However, many Lemminials don't know or care about audio quality so don't have audio systems.  I think Amazon may have had a next generation of usage in mind whereby a person's worn digital assistant (aka smart phone or smart wear for the young ones) will have Bluetooth INPUT capability.  Most such devices have BT output (e.g., sending to headphones) but few have input (where a sound source sends sound to the phone).  Even if they did, most BT implementations limit the device pairings to just a few and not at the same time.  So that limits the advantage of having more units than amplifiers.  However, since this is a common scenario, I'd expect there to be some solutions on the horizon with a BP protocol upgrade as well as some adapters to work around the problem through BT spoofing or emulation.  Bet you Amazon is thinking about that already.

Stay tune for our full review.

Our studies strongly suggest that we will all die at some point.
They also found that if we all are peaceful and give others pleasure,
We will all enjoy peace, have great satisfaction, and be very, very, happy!

It all starts with you, right now!